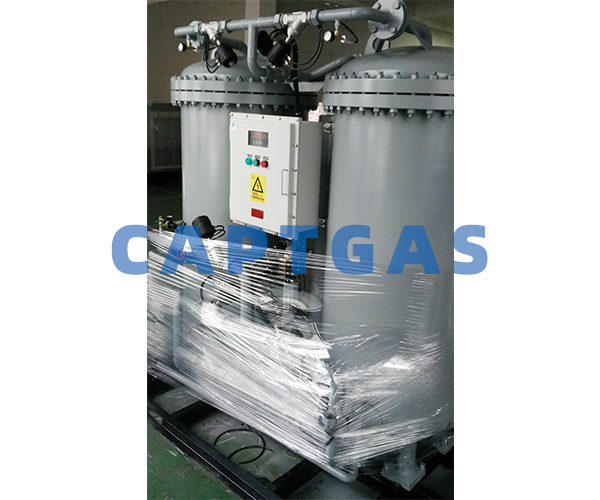 The essence of mine nitrogen fire prevention is to inject a certain amount of nitrogen into the goaf oxidation zone or fire area to reduce the oxygen content to below 5%, so as to achieve the purpose of preventing fire and suppressing gas explosion. Compared with other fire-fighting methods in mines, nitrogen fire-fighting technology is superior to traditional grouting fire-fighting technology: the nitrogen injection process is quick and rapid. The product's nitrogen temperature is low, and the nitrogen can quickly permeate and fill the corners of the oxidation zone or fire zone in the goaf. In the grouting process, because the flow of the slurry in the oxidation zone or the fire zone in the goaf area is affected by the uneven floor, the roof falling and the uneven accumulation, etc., a "flow channel" will be formed, so it cannot be uniformly and fully covered in the "media On the surface, it failed to truly "isolate" oxygen and prevent coal from oxidizing and spontaneously combusting. Therefore, nitrogen fire-fighting technology has better fire-fighting effects.

Eliminate the danger of gas explosion

Reduce the effect of air leakage

Air leakage in the goaf is one of the main causes of spontaneous fire, let's talk. For closed or semi-closed goaf areas, theoretically speaking, the total amount of mixed gas in the injected space is increased after nitrogen injection, which can reduce the pressure difference between the closed area and the outside, and reduce the external flow of the closed area. The role of internal air leakage.

Whether it is an external fire or an internal fire, when a certain flow of nitrogen (greater than the air leakage) is quickly injected into the fire area, the oxygen content in the area is gradually reduced from 21% to less than 10%, and the raging fire will gradually self-extinguish.

The practice of mine nitrogen fire prevention and extinguishing shows that: this technology has the advantages of fast fire extinguishing speed, not only can prevent fire, but also inhibit gas explosion, and has no pollution to the environment and electromechanical equipment. However, the following issues should be paid attention to when applying mine nitrogen to prevent and extinguish fires:

1. While implementing the nitrogen injection process, it is necessary to strengthen the plugging, reduce the air leakage in the goaf as much as possible, and improve the airtight quality of the goaf so that the nitrogen can be stored.

2. In the selection of the nitrogen production device, a certain "gas production" must be considered. Only when a certain amount is satisfied can the effect of nitrogen injection to prevent fire extinguishing can be effectively achieved. Because there is no impermeable "wall" (airtight). Affected by many factors such as mining, it will cause the destruction of the surrounding rocks in the goaf and form an air leakage channel in the goaf. Assuming that there is an air leakage rate of 10Nm3/min in the goaf, if the gas production rate of the nitrogen generator is 600Nm3/min, then the gas production rate per minute is only 10Nm3, that is, the nitrogen injection rate and the air leakage rate are basically the same. Can it reduce the oxygen content in the goaf? Therefore, only a large amount of nitrogen can truly meet the actual demand for nitrogen fire prevention in mines.

A fixed nitrogen generator for mine